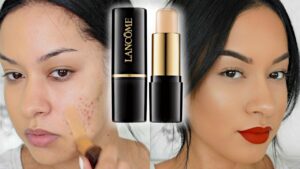 If you haven’t tried Lancome’s Tient Idole Foundation Stick, then you really should! Image Credit Youtube.

When I was working as a Counter Manager for a well-known Makeup Company, we were the reigning entity when it came to the best ( and longest lasting ) foundation on the market. However, as the market continued to grow and expand, we soon had competition from other well known brands who had worked day and night to release their version of a 24 hour foundation formula. One of those contenders for the foundation crown was Lancome, our next door neighbor counter.

Lancome’s Tient Idole 24 Hour Liquid Foundation gave us a run for our money, especially because Lancome had released a wide variety of shades versus our fairly conservative shade choices. The only downfall was that their formula was more expensive than ours ( by over ten dollars ), but none of that mattered to the customer who left our counter because Lancome had their perfect shade match.

My best friend was the Counter Manager for Lancome at the time, and when business was slow, we were expected to study our inventory, create face charts and test the products so we could properly sell them to customers. I had pretty much tested every single color, product and skincare item available at my counter and she needed someone to sit in the chair for her to practice on, so I was happy to oblige.

This was the first time I tried Tient Idole Liquid Foundation, and I definitely could see first hand why it had given us a run for our money. It definitely had staying powder, plus it wasn’t in constant conflict with my oily skin. My friend gave me a tester dram bottle to take home and compare side by side with my company’s leading foundation. We would often do this for each other, so we knew how to better sell our product and recruit clients from other counters. She was one of my most favorite people to work with, because we didn’t work against each other but with each other. I learned a lot from her as far as skincare and makeup how-tos.

When I found out that Tient Idole had a stick foundation version, I just had to try it. Even though I’m not really a fan of stick foundations ( in the past, they have proven too caky for my oily skin ), the liquid version had suited me so well that I just couldn’t pass up this opportunity.

One major difference off the bat ( besides this being a creamy stick version foundation ) is that if you’re used to using a beauty blender, you’ll need to select a different tool. I recommend using a high quality foundation brush to blend this . Also, it would serve well to have not just the shade that matches your skin, but one that is two shades lighter and two shades darker for highlight and contour. I’ve learned that if you find a foundation that works for you, it really helps to use the same formula for contouring and highlighting. Yes, it’s going to cost you a little bit more than it would have but you can rest assured that the quality and product are the same and will give you an overall seamless look.

This is also a full coverage foundation, so if you have blemishes and inconsistencies to cover up, this will work nicely.

Lancome Teint Idole Ultra Wear Makeup Stick is available at Just4Girls.pk in several different shades. You definitely want to grab these up before they’re gone!