The History of Blush, Part One 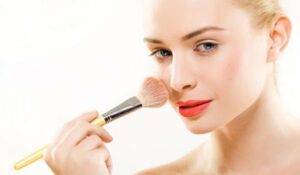 Blush has a long and fascinating history. Image Credit NewLoveTimes.

Blush has a long and interesting history. This little powerhouse product has been around since Ancient Egypt. The first blush products were made with a natural pigment (ground red ochre). The pigment was mixed with fat to create the famous red tint. People ( men and women) would smear this pigment on their lips and cheeks to provide contrast to the harsh black kohl around their eyes.

Red Vermillion was the pigment of choice used by the Romans while the Greeks chose crushed mulberries. These colors would provide a huge contrast with their pale faces. During that time, pale faces became sort of a status symbol, so people would use chalks and other pigments to lighten up their faces. Unfortunately, a lot of these materials had lead and other hazardous chemicals in them. This led to scarring, skin illnesses and sometimes death. The Middle Ages brought on a decrease in cosmetics use. This is because pale skin had become an indicator of the very wealthy and upper class. In fact, some people were so fanatical about being pale that they would actually bleed themselves. As in, they would drain their bodies of much needed blood in order for their skin to appear pale. This processed included using leeches to remove the color from skin as well as making an incision into the vein to allow blood to escape. Of course, this proved extremely problematic as it brought about disease and blood poisoning. I Heart Makeup Hearts Blusher in Candy Queen of Hearts available at Just4Girls.pk.

Another side of blush was its use amongst prostitutes. The mark of a person of the upper class was pale skin with a small amount of faint rouge. This was to distinguish from the heavily rouged cheeks of prostitutes. In fact, as I’ll discuss in part two of this series, at one point wearing rouge was considered “impolite” because of the association of the product with “harlots” and “ladies of the night.” During the time of Elizabeth I, the use of blush took on a different look. Now it was perfectly acceptable to have rouge-heavy cheeks, as this was the fashion preference of the Sitting Queen. Courtiers clamored to copy her signature look which was pale face, high piled hair and of course, rouge.

Cosmetics were not very friendly during this time, because they remained extremely toxic. There are many cases of people ( men and women, because everyone wore rouge during that time) having been poisoned by blush, as well as suffering from permanent scarring and pock-marking.

Today, we can rest assured knowing our blush won’t poison us. Cosmetics has evolved tremendously, and with more and more companies going Vegan and Cruelty Free, the use of chemical components has been reduced to a minimum.

If you liked this article, please check out Why Halal Cosmetic is The Next Big Thing.