The History of Blush, Part Two 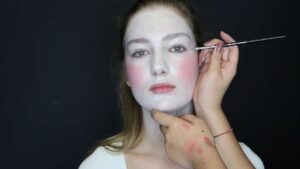 Blush has a pretty fascinating ( and kind of dry ) history. Image credit: Youtube.

In part one of this two-part series, I’m sharing the history of blush from its roots to modern products.

To recap, blush has been around since the times of Ancient Egypt. It was created using natural pigments and used amongst Egyptians from Pharoahs to courtiers. Eventually, the popularity of this product spread to Ancient Rome and Greek. There it was used predominately amongst the elite, as a pale face with bright cheeks signified wealth and upper class. People did some crazy things to make themselves appear pale, from using leeches to bleeding themselves. Rouge was used among the wealthy and prostitutes, but not amongst the middle class or the poor. It was also very toxic and often poisoned people.

After the French Revolution, makeup continued to stir up controversy. It was a sign of the elite and the budding bourgeoisie rejected it just as they had their former Monarchy. It then fell out of fashion except amongst prostitutes and escorts.

Queen Victoria even declared that wearing heavy makeup ( including red lipstick and prominently placed rouge ) was “impolite.” What she actually meant was, “if you wear these colors, then you liken yourself to a prostitute.” I Heart Makeup Hearts Blusher in Candy Queen of Hearts available at Just4Girls.pk.

Actresses also wore rouge and red lips on stage, however, during those times being an Actor was considered kind of a shameful profession. Actors were not celebrated as they are today, and they were considered to be “improper company” to keep.

Makeup didn’t completely disappear; women opted to wear very light, natural looking makeup. To make their lips appear plumper and their cheeks rosy, women would actually bite their lips and pinch their cheeks. I can only imagine what kind of skin damage this led to.

The turn of the century proved to be the golden age and saving grace for makeup; especially blush. Companies such as Guerlain, L’Oreal and Maybelline started offering commercially produced beauty products, as they could see the mass appeal for makeup. During this time, makeup was absolutely much safer than ever to use ( no more lead or poisoned powders ). Flappers in the 1920’s helped blush and makeup in general become mainstream. During the 1950’s, icons such as Marilyn Monroe, Elizabeth Taylor and other famous pin-ups made blush a beauty staple.

Blush had its hey-day in the 1980’s, when bold makeup looks were very much in fashion. Alongside bright blue eyeshadows and big red lips, bright pink blush was an absolute must if you wanted to stay on trend.

For a while, blush was set aside in favor or bronzers and shimmer powders. However, once the world caught the “Kardashian Contour Method” bug, blush once again saw a rise in popularity. Only now, blush was available in a variety of mediums: powder, creme, liquid and tint to name a few. The shade ranges have also changed, with more natural shades being made available on the market.

Blush is definitely a product we want to keep in our beauty routine. It helps provide a healthy glow, plus it is essential when it comes to contouring and highlighting.

If you liked this article, please check out Best Liquid Highlighters for a Dewy and Hydrated, yet Strikingly Radiant Summer Glow.